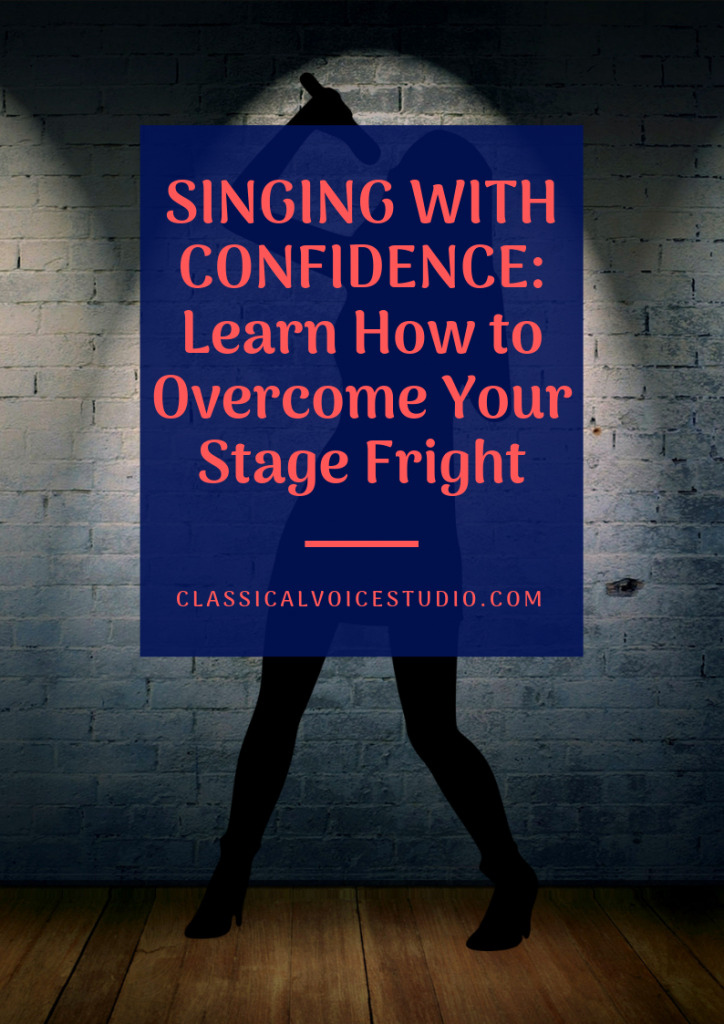 Disclaimer: There may be affiliate links on this post.  This means that, as an Amazon Associate I earn from qualifying purchases you make after clicking one of my affiliate links at no additional cost to you.

I hear this from singers all the time. If you’re reading this article, then I am guessing you can relate.

But I don’t just hear this from newbies. Seasoned singers tell me this all the time.  They’ll only sing in a choir and won’t even try to sing a short solo.  Why?

Because the idea of singing by themselves in front of an audience is the equivalent of facing down a saber-toothed tiger.

At least, that’s the way their nervous system perceives it.

The Reasons You Have Stage Fright

1. The Power of Emotions

Really well-meaning people might say “just get out there, you have an amazing voice, you’ll be fine.”  But they’re going about it all wrong. They are trying to build your confidence from the outside.

What they don’t understand is that, emotions are more powerful than logic. There is a little part of the brain called the amygdala that governs emotions. While some people can use their logical brain to overpower their animal brain and don’t experience stage fright, in others, it likes to overreact to situations. For people like us (yes, even me), standing on the stage is frightening.

That leads me another unhelpful thing that people might say.  “You just need to be believe in yourself.” This phrase makes me a little angry when I hear it. Chances are you’ve heard this before. Would hearing it again magically make the stage fright go away? No.

Newsflash:  Being Nervous Does Not Mean That You Don’t Believe in Yourself.

2. You Care About the Outcome

Being nervous is just a human response when you care about what you’re doing.  Whenever you step up on stage, there is always a chance (even if it’s very tiny) something could go wrong.

You’ve spent hours practicing your song(s).  You have worked out every nuance and worked every note into your voice. While you know that you sound awesome, sometimes there is just a little tiny part of you that worries you’ll forget something. I totally get that.

Perhaps you are somewhat unprepared for your solo.  Of course, your anxiety about getting on stage will naturally be more than if you were fully prepared. But even so, that doesn’t mean you can’t get up there and do it if you’ve built your confidence muscle first.

My Battle With Stage Fright

I have a confession to make: to this day, I still struggle with stage fright. Even after over a decade of choir and solo singing. In fact, it happened to me this past Friday night.

My friends and I put on a benefit concert called Hear My Song at a local music store to raise money for the Rain Foundation.  I practiced the crap out of my solos, but nevertheless, I was nervous to get on that stage.

I had a solo in the first song of the night, the first voice the audience heard sing.  For whatever reason, the house lights were not all the way down and I could see every single face of the 50 or so people in there, including 2 former students of mine.  Some of these people had heard me before, some didn’t know me from Adam.

Even though my solo was short, my heart was pounding pretty hard.  And I sing in front of over a hundred people at church at least once a month (and I still can get nervous about that, too). Really, the small audience shouldn’t have made me so nervous. Yet, there I was, experiencing stage fright.

My solo song was a few songs later. In this case, I was singing the song “She Used to Be Mine,” from the musical Waitress. It’s a difficult song with a big range.

I’m not used to singing Broadway style music, so this was definitely outside of my comfort zone.  Belting is a relatively new skill for me. I’ve been struggling to make the vocal register transitions smooth.

However, I had just made a huge breakthrough the day before. So I had extra reason for my anxiety to be up, but I LOVE this song (and I was doing it for a great cause!).

Anyway, by the time it was my turn, the lights were completely down, and you couldn’t see anyone’s face from the stage.  While this did lessen the nerves, they were still there.

Here I was, a seasoned singer, who’s sung solos over a hundred times, still nervous.  I knew that I’d practiced that song several dozen times. I knew that I knew every note, every rhythm, every word, and every expression.  Yet, still doubt crept in that I would mess something up.

My point is that beating stage fright does not mean that you won’t be nervous when you get up to sing.  It means that, despite your nerves, you have the strength to get up there and do it anyway. But how do you get yourself to a point where you can push yourself to do that? Baby Steps.

Every time you have a small win, that builds your confidence to take on slightly larger challenges. Even if you don’t succeed at that larger challenge, you build strength. Just like an actual muscle, the strength that you built from the smaller wins doesn’t disappear. Regardless of whether or not you beat it, your confidence muscle gets a work out each time you face a new challenge.

Below you will find the steps to help you go from “completely, never, ever, ever going to sing a solo in front of an audience” to “ok, let’s do this.”

Step 1- Get Comfortable with Your Face

Tip: If facing the mirror is too much at first, record yourself. Then watch yourself afterwards. You could always make the decision not to watch it/just delete it.  Having choices gives you power. That power lessens the psychological stress while you are actually recording.

Step 2- Put That Solo on Autopilot

Remember, when you’re in front of an audience and your emotional state is heightened. Your access to your prefrontal cortex (your logical brain) is hindered.  If you’re able to sing the song on autopilot, then it won’t matter how little or how much your amygdala is acting up- autopilot will take over. This does mean that you need to practice the song the same way enough to ingrain it into your voice.

Step 3- Get Comfortable with Your Whole Reflection

Tip: Seeing your whole body will also give you the opportunity to see your body language.  You don’t need to work on that right off the bat, but it will give you an idea of whether or not you need to work on it later.[/box]

This should be a person whom you really trust, someone you can confide your fears in who won’t just brush off your stage fright.  Someone who can gently offer constructive criticism. Sing your song in front of this person enough times that your nerves are calming down.

1. Large spaces tend to have more echo which can be intimidating. 2. The lack of privacy means anyone might walk in unannounced.

Tip: This person should be someone similar to the first person. Someone you trust not to belittle your stage fright. It may be hard to find a second person whom you trust as much as the first.  You don’t have to sing in front of them at the same time in step 5.

Step 6- Increase the Size of Your Audience

Tip: It may help to go back to step 6 and repeat it until you’ve run out of friends.

Now is the hard part. Now I ask you to step even farther outside your comfort zone.  In order to move forward, you need to sing in front of people you don’t know very well, or maybe not even at all.

You can do this several ways.

1. You need to have the knowledge that a group of people are actually hearing/seeing you.
2. Remember how having a choice in step 1 made the stress easier? Now, I challenge you to make it harder. Recording a video gives you the choice not to post it.

Somewhere in the back of your mind, you know that you might not actually post the video when you’re done. Now, you’ve lessened the psychological burden, making it not as daunting as being live.

Tip: It doesn’t help you get over that stage fright if you are not actually facing it down. Remember that you’ve already jumped this hurdle at least a dozen times now. Every time you do, it is a tiny bit easier than before.

Now you are ready for the show.  You’ve worked out your confidence muscle so many times. By now, you should have the strength to get up on that stage, despite your stage fright.

Overcoming stage fright is not about making it go away. It’s about building up the strength to push through that fear in order to make the decision to stand up and sing. That is what confidence is.

8 Step to Building Your Confidence to Sing Solos I am a music and voice teacher with 10 years experience. I help aspiring singers develop strong, healthy voices.